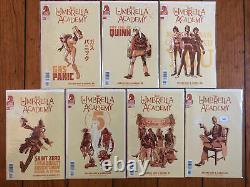 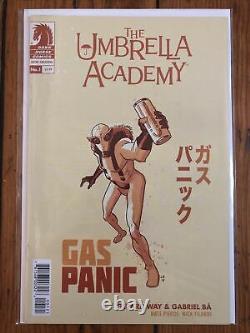 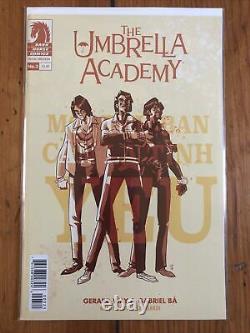 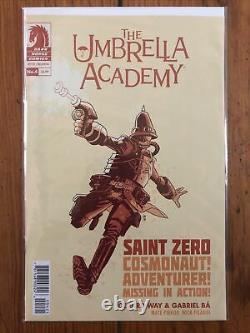 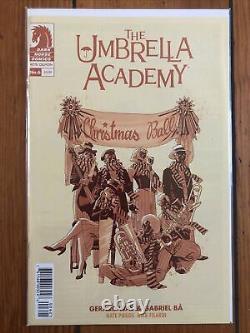 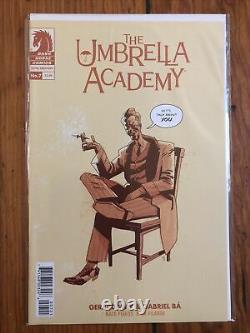 Comes sealed in acid-free bags/boards and stay flat mailer from a one-man/single father indie shop. Art by Gabriel Ba and Nick Filardi. Faced with an increasing number of lunatics with superpowers eager to face off with his own wunderkind brood, Sir Reginald Hargreeves developed the ultimate solution Now, just a few years after Hargreeves's death, his Umbrella Academy is scattered. Number Five is a hired gun, Kraken is stalking big game, Rumor is dealing with the wreckage of her marriage, a rotund Spaceboy runs around the streets of Tokyo, Vanya continues her physical therapy after being shot in the head-and no one wants to even mention Seance until issue #2.

Issue #2 As big-business interests close in on the overgrown adolescents of the Umbrella Academy, unlikely alliances are formed and two brothers head into deep space. Issue #3: The City wow I have never been so amazed in my life. The mothers of agony seem like dirtball hoodlum scum, so iI was very sceptical when a friend recommended them for psychic advice. Their place of business leaves a lot to be desired, in a terrible neighborhood, but its the results that matter and man did they deliver! Their psychic seems like he's done a lot of drugs, but as soon as we sat down in their private frankly kind of frightning room, it was like my dead father was right there beside me again! He knew things only my father could know, including the dirt I needed on my sister to lock her out of the trust. If I could give the mothers of agony a 10 star review I would. Issue #4: A heart-to-heart with Mother leads Vanya a. The White Violin to reassess what makes her special. Two of her siblings are caught in a shootout, and two more have a cosmic moment, while the bad guys infiltrate the Hotel. Issue #5: At the height of their popularity and adventuring, the Umbrella Academy had no idea their leader, Reginald Hargreeves, had created an off-world prison to house their worst opponents. Now, a few years after his death, Hargreeves's inhuman plan has gone terribly wrong, and the Umbrella Academy are not ready for Earth's nastiest villains. Issue #6: "Fear is a prison". Issue #7: The heroes face a mortal showdown with Perseus and the villains from Oblivion, as a new threat arises, deepening the mystery of the Umbrella Academy.

The item "Umbrella Academy Hotel Oblivion 1-7 Gerard Way Gabriel Ba Cover B Variant Set NM" is in sale since Thursday, March 14, 2019. This item is in the category "Collectibles\Comic Books & Memorabilia\Comics\Comics & Graphic Novels". The seller is "vagabondcomics" and is located in Grass Valley, California. This item can be shipped worldwide.