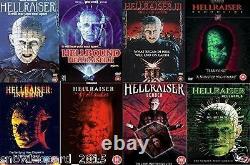 Clive Barker's screen adaptation of his novella'The Hellbound Heart'. Sexual profligate Frank Cotton (Sean Chapman) opens a Chinese puzzle box and discovers the entrance to Hell, where the resident Cenobites led by Pinhead (Doug Bradley) rip the flesh from him.

When Frank's brother Larry (Andrew Robinson) and his wife Julia (Clare Higgins) then move into Frank's house, a skeletal Frank appears to his sister-in-law and asks her to supply him with corpses for his regeneration. The cast also includes Ashley Laurence, Simon Bamford and Robert Hines.

Hellbound - Hellraiser 2 [DVD]. The sequel to Clive Barker's'Hellraiser' re-visits the mythological world of a cult of sadists and the undead, the Cenobites. While an obsessive psychiatrist (Kenneth Cranham) attempts to raise Pinhead and friends to earth, teenager Kirsty Collins (Ashley Lawrence) receives a message from her father from the other side, and goes on an underworld quest to save him from the clutches of Hell. Kirsty Collins (Ashley Laurence) lies in a psychiatric hospital, haunted by the night of unspeakable terror that destroyed her family. Now, only hours later, the nightmare is beginning again.

From the blood-stained mattress secreted in his home, obsessive psychiatrist Dr. Channard (Kenneth Cranham) raises the remains of Kirsty's murderous stepmother, Julia (Claire Higgins). Together, Channard and Julia unlock the secret of the Lament Configuration puzzle box to release the unlimited horrors and ultimate pleasures of Hell.

For the second time, Kirsty must return beyond the limits to the Outer Darkness to confront the darkest desires of hell and free her father's soul. A soul-chilling nightmare, Clive Barker's Hellbound resurrects the darkest horrors of Hell unleashed in his award-winning horror epic Hellraiser. Hellraiser 3 - Hell On Earth [DVD]. This time a young investigative reporter, Joey Summerskill (Terry Farrell), witnesses a vision of the horrific death of a tormented teenage boy and decides to find out the truth behind it.

Her work uncovers the Lament Configuration Box which opens the door to the Cenobites' demonic world of pleasure and pain. His plan is to reclaim the box and free himself from Hell. Hellraiser III : Hell On Earth. Hellraiser 4 - Bloodline [DVD].

The fourth film in the popular horror series finds the evil Pinhead returning to terrorize the family who created the music box which set him free from hell in the first place. The family fight back - doing their best to dispose of the leatherclad badboy forever - but plenty of bloody deeds occur along the way.

Supernatural villain Pinhead (Doug Bradley) finds himself on the wrong side of the law in this, the fifth film in the Hellraiser franchise. Joseph (Craig Sheffer) is a detective with the L. Who one morning discovers he's no longer living in California - he's been exiled to Hades, and the only way to escape is by solving the mystery of the all-powerful puzzle box. The box is now in the hands of the fearsome demon Pinhead, and Joseph finds himself in a life-and-death struggle with the demon for control of the puzzle box. Pinhead (Doug Bradley) makes another unwelcome return in this, the sixth film in the'Hellraiser' franchise.

A journalist faces a battle against the forces of evil in this, the seventh outing in the'Hellraiser' franchise. After uncovering a shadowy group that can bring the dead back to life, investigative reporter Amy Klein (Kari Wuhrer) soon finds herself enmeshed in the group's demonic activities whilst battling to keep control of her sanity. A group of role-playing gamers' fantasies turn horrifyingly real in this, the eighth instalment in the'Hellraiser' franchise. Not best pleased when teenage fans construct a virtual online'Hellworld', Pinhead (Doug Bradley) invites the group to a suitably themed party, where he quickly sets about turning their reality into a nightmare they'll never forget. BUYERS OUTSIDE UK AND EUROPE NEED TO CHECK THEIR DVD PLAYER COMPATIBILITY TO PLAY THESE DISCS.

The item "HELLRAISER COMPLETE MOVIE DVD COLLECTION FILM 1 2 3 4 5 6 7 8 Original UK Releas" is in sale since Saturday, July 2, 2016. This item is in the category "DVDs, Films & TV\DVDs & Blu-rays". The seller is "snowleopard_2015" and is located in Barking. This item can be shipped worldwide.
mineralsupercrystalsevenridessupernaturalrealisticcollectionrarecardhealingseriespendantspecimenheart-shapednaturalbraceletmarvelbabymelodycavequartzdeancarvedbeautifulamethystfunkotopiclargecompletemangaskullexclusiveagatebrazil