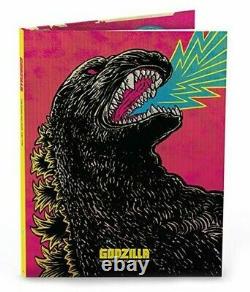 In 1954, an enormous beast clawed its way out of the sea, destroying everything in its pathand changing movies forever. The arresting original Godzilla soon gave rise to an entire monster-movie genre (kaiju eiga), but the King of the Monsters continued to reign supreme: in fourteen fiercely entertaining sequels over the next two decades, Godzilla defended its throne against a host of other formidable creatures, transforming from a terrifying symbol of nuclear annihilation into a benevolent (if still belligerent) Earth protector. Collected here for the first time are all fifteen Godzilla films of Japans Showa era, in a landmark set showcasing the technical wizardry, fantastical storytelling, and indomitable international appeal that established the most iconic giant monster the cinema has ever seen. Atomic testing in the Pacific awakens a gigantic reptilian creature dubbed Godzilla off the coast of Japan and sends the monstrous menace on a rampage across Tokyo and its environs. Director Ishiro Honda's "kaiju" classic spawned innumerable sequels; Akihiko Hirata, Takashi Shimura, Momoko Kochi, and Haru Nakajima star.

Includes the original Japanese release "Gojira" and the 1956 re-dubbed American version "Godzilla, King of the Monsters, " with Raymond Burr. In Japanese with English subtitles/Dubbed in English.

While flying over a remote island, two pilots spot Godzilla (which may or may not be the same Big G supposedly destroyed in the first film) fighting with another creature, the spine-covered Anguirus. When the beasts' battle brings them to mainland Japan, officials must find a way to stop their destructive monster mash.

It's the showdown monster fans dreamed of, as the great ape is found alive and well! In the South Seas and brought to Japan, where he has an all-out slugfest atop Mt.

Fuji with the mean, green lizard king. Michael Keith, James Yagi, and Mie Hama co-star alongside the two biggest titans in movie history. A giant egg washes up on a Japanese beach and is taken to a Tokyo amusement park. But when the egg's mother--the winged wonder known as Mothra--shows up to reclaim it, and a revived Godzilla is on the rampage in Tokyo, the stage is set for a monster-sized showdown. Akira Takarada, Yuriko Hoshi, and the Ito Sisters star. Ghidorah, The Three-Headed Monster (1964). Mothra, Rodan, and the king of them all, Godzilla, join forces to protect the Earth from the alien menace of King Ghidorah, a thrice-domed, golden-scaled, bat-winged beastie with designs on widespread property destruction. This spectacular monster mash solidified the green guy's conversion from villain to hero.

Yosuke Natsuki, Yuriko Hoshi star. An alien planet asks to "borrow" Earth monsters Godzilla and Rodan to help them defeat their own indigenous menace, triple-headed Ghidorah, who moved off-world after his defeat in the 1964 film that bore his name (how embarrassing).

Little do the gargantuan good guys know it's all part of a sinister invasion plot. Nick Adams stars as an Earth astronaut. Ebirah, Horror Of The Deep (1966).

Remember those Sea Monkeys you had as a kid? Well, one of them's 160 feet long and being used by a terrorist group out to take over the world! Good thing their island base is also home to Godzilla, who teams with Mothra to turn the colossal crustacean into so much shrimp cocktail. Akira Takarada, Jun Tazaki star.

It's not easy being a single parent, especially when your island home is invaded by giant spiders and praying mantises and teeny little Japanese scientists. Watch as Godzilla fils and pere make the world safe for giant lizards. Stars Akira Kubo, Tadao Takashima, Akihiko Hirata; directed by Jun Fukuda.

The "It's A Mad, Mad, Mad, Mad World" of Japanese creature features finds invaders from the planet Kilaak taking control of Rodan, Mothra, Angurus, Baragon, and Godzilla and his son, plus the other inhabitants of Monster Island, then dispatching them to attack the world's major cities as part of the aliens' plan to conquer Earth. All this, and Ghidrah, too! Jolly green goliath Godzilla teams up with son Minya to help a young boy cope with troubles from school bullies, while simultaneously defending Monster Island from the nasty Gabara, in this lighthearted entry in the Toho series.

Action-filled and relevant sci-fi slugfest features the hit song Save the Earth. With Akira Yamauchi, Toshie Kimura. The item "Godzilla The Showa-Era Films, 1954-1975 (Criterion Collection) New B" is in sale since Friday, December 6, 2019. This item is in the category "Movies & TV\DVDs & Blu-ray Discs".

The seller is "importcds-au" and is located in Shepherdsville, Kentucky, United States. This item can be shipped worldwide.