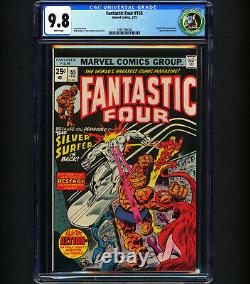 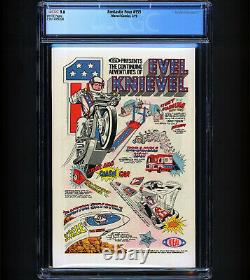 Fantastic Four #155 CGC 9.8 White Pages (1975) Pennsylvania Dutch Collection. 1 of 21 in CGC 9.8 - Highest Graded. Tough Black Cover makes this issue hard to find in high grade. The red ink on the back cover does not actually look like this in person! - My scanner is making it look WAY WORSE than what you see.

I just can't figure out what setting to adjust to fix this. HUGE SILVER SURFER KEY ISSUE : Silver Surfer discovers his true love, Shalla-Bal, is still on Earth. Dr Doom orders the Surfer to destroy the Fantastic Four, or Shalla-Bal's memory of Silver Surfer will be wiped forever by Dr Doom.

An epic Battle ensues between Silver Surfer and The Fantastic Four. The Surfer is about to eliminate them, but has a change of heart and tells the Fantastic Four why he has to eliminate them. The Surfer explains that after he left the Defenders, he flew to the top of Mt. He remained there for many weeks, entranced and unmoving until he decided to try once more to break free of the barrier that Galactus placed around the Earth to imprison him. The Surfer flashed around the world faster and faster, his concentration strengthening with each orbit until the world itself seemed no longer to exist.

Then, gathering all his cosmic energy, the Surfer struck the barrier and passed through it. Unfortunately, as soon as he penetrated the barrier, his cosmic power left him, because Galactus' control over the Surfer extends far beyond the barrier. The Surfer's body began to shrivel and weaken, forcing him to return to Earth.

The barrier sealed itself behind him. He impacted like a meteor in a village square, and although he did not know it, he was in Latveria near Dr.

As the Latverian townsfolk rushed towards him, he emerges from the crater and happens to see a poster of Latveria's new queenhis beloved Shalla-Bal herself. He can hardly believe his eyes, for he believed that she was forever banished to Zenn-La by Mephisto. The thought that she had been so near all these months nearly drove him crazy and he quickly forced the townsfolk to tell where their queen resided. Soon he flashed to the castle on his surfboard, but when he flew over the battlements he could hardly believe his eyes. There, battling armed and armored guards, were the Fantastic Four themselves.

He hesitated, not knowing what to do, and as he watched more guards arrived armed with energy weapons who destroyed the Fantastic Four. But as he continued to watch, he learned that what he saw were robots in a routine training exercise not the real Fantastic Four. Then he glanced into a window and saw Shalla-Bal in person and he approached her, happy to be with her again. But she failed to recognize him and asked him to leave before she summoned the guards. When he again asked her whether she recognized him, his question was answered by Dr.

If she no longer knows him, gloated Doom, it is because she no longer desires to know him. The Surfer's once beloved now belongs to him, said Doom triumphantly. Shalla-Bal is Doom's wife. The Surfer concludes his narrative by saying that Doom swore to release Shalla-Bal from her vows and return her memory if the Surfer would slay the Fantastic Four. It seemed as if he had no other choice for there is nothing that he would not do, nothing that he would not sacrifice, to regain Shalla-Bal's love.

Then, begging his friends' forgiveness, he bathes them with his cosmic power. This story also references how the Defenders are relatively unknown. The Fantastic Four are aware of them at this point because The Thing met the Defenders for the 1st time in Marvel Two-in-One #6 & #7 when he teamed up with Doctor Strange and Valkyrie respectively. IT WILL ARRIVE TO YOU SAFELY! Since their authenticity can be verified using the serial #, you know what you're getting.

About Me: I've been into comics ever since I can remember. I treat all my books with the utmost attention and care. They are stored in a temperature and humidity controlled environment. If you have any other questions, - feel free to send me a message!

Thanks and have a nice day! The item "Fantastic Four #155 CGC 9.8 1/21 HIGHEST GRADED Galactus & Shalla-Bal KEY ISSUE" is in sale since Sunday, September 5, 2021. This item is in the category "Collectibles\Comic Books & Memorabilia\Comics\Comics & Graphic Novels". The seller is "rarekeycomics" and is located in Folsom, California.

This item can be shipped to United States, Canada.